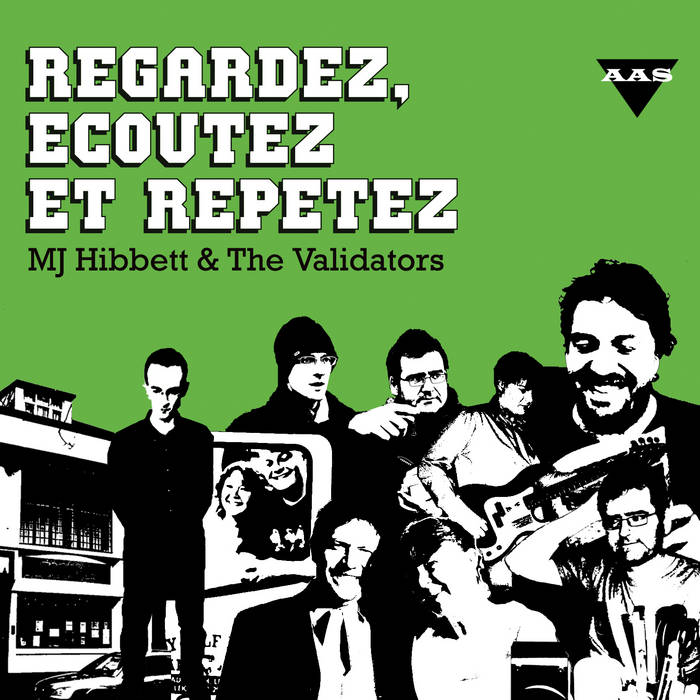 stewart black Songwriting. Proper songwriting is why I love this album. Lyrics that are true, funny, sad, wry and ironic in equal measure all beautifully realised by an excellent band. Favorite track: Do More, Eat Less.

The fourth album from Indie Legends MJ Hibbett & The Validators, 'Regardez Ecoutez et Repetez' has rightly been hailed as their best yet. An 'Album Of The Day' on BBC 6Music and (very) Long-listed for the Mercury Music Prize, this is their most boistrous, confident, fact packed album covering all aspects of life in your thirties like daft dancing, office politics, dieting, hen nights and getting home before closing time. It's full of music, opinion, tunes and good times - as you can see from the reviews...


It's impossible not to raise a smile at the delightful absurdities and lyrical observations of indie-pop "poet laureate" Mark Hibbett, especially when they're liberally sprinkled throughout "Regardez, Ecoutez Et Repetez", the fourth album from Hibbett and his perfect musical foil, The Validators

Writing from the point of view of a thirty-something coming to terms with adulthood and the modern world, there are numerous eternal truths in songs such as "Do The Indie Kid", "Do More, Eat Less", "All The Good Men", "My Boss Was In An Indie Band Once" and "It Only Works Because You're Here".

The wistful nostalgia of "Leicester's Trying To Tell Me Something", about the closure of the city's venues, has a serious point to make, and like those other kings of the quirky lyric, Half Man Half Biscuit, repeated listening reveals previously overlooked gems.

Like HMHB too, The Validators do indie pop-rock well - catchy riffs proliferate, although unlike their Wirral contemporaries they also add elements of a capella, delightful harmonies, folky sounding fiddle and brass that sometimes brings to mind both latter and early-period Chumbawamba.

Almost certainly too clever by half for popular acclaim, subscribe now to your new favourite underground sensation.


In a pointy-bearded parallel universe, MJ Hibbett & The Validators would be more than just underground legends.

Regardez, Ecoutez Et Repetez is stuffed with rumbustious pop philosophy you can dance to - the self-explanatory Being Happy Doesn't Make You Stupid, the Hibbett diet plan of Do More, Eat Less and the introducing-the-girlfriend awkwardness of Best Behaviour.

The ballads are cracking too. Information Technology torch song It Only Works Because You're Here is Hibbett's Back For Good, and Leicester's Trying To Tell Me Something is a sweet eulogy to a disappearing town, the pubs and venues he played and the town he might have stayed in, all torn down in the name of progress.

This is indie music the way it was supposed to be, with a gleeful, anarchic DIY spirit, the band's enthusiasm for each and every song bursting out of the stereo. There be magic here - seek it out.


Over the course of his and his band's many releases, MJ Hibbett has shown his work to occupy something between a memoir and a column — or a blog — of general observations, a product of his own upbringing, musical and otherwise, in a different time. It's these kinds of tensions and observations that make Hibbett's work more than just "indie pop" as such — if anything, it puts him in line with some of the best hip-hop MCs out there — and Regardez, Ecoutez et Repetez continues the string of his winners. Reprising the merry kick of the "Do the Indie Kid" single with a slightly different "music of the future" section, the album otherwise finds Hibbett and the Validators touching on everything from computer desk guys finding love to the travails of having to play shows too late at night, all while finding new ways to gently twist their catchy understated rock chug. "Do More, Eat Less" relies on strings and a merry rhythm shuffle on the verses and squelchy horns on the break even as Hibbett dispenses dietary advice from a knowing position, while "We Can Start Having Fun" might be one of the few rock epics about just going for it worth its salt (and the band lives up to it with massed vocals, a triumphant arrangement, and a slow-burn coda). Perhaps one of the most poignant moments comes with "Red Black Gold," with Hibbett reflecting on the luck of a generation of latter-day Smiths fans not knowing just what "the Bomb" that Morrissey sang of in "Ask" was. It's a perfect summary of noting how time and place shape a person and perceptions — and in keeping with his work, it's a catchy-as-hell song.


MJ Hibbett & The Validators are another band who are very much about their lyrics and this is very much in evidence on this, their third album. Lead track Being Happy Doesn’t Make You Stupid is a knockabout indie pop tune, with weird interference. It’s difficult not to think of Half Man Half Biscuit, especially when they break into a chorus of “hey there emo boy, give us all a smile”. Do The Indie Kid is the Time Warp for non-indie kids, affectionately sending up their dancing. Do More, Eat Less is a disturbed Muppet Show theme tune, with an upbeat chorus. Vocals are buried deep in the verses, meaning the chorus attracts more attention. It’s weird and wonderful. Its when you get to Best Behaviour you realise how much Mark can sound like Eddie Argos at times, those great affected, sometimes surprised vocals which are also over accentuated and with lots of gaps for effect. It’s a good thing, and he retains enough of his own character to make it endearing. We Can Start Having Fun starts out all mournful and although the lyrics are optimistic it sounds sorry for itself. There’s then a celebratory awakening, brass and shimmering guitars and swaying teary eyed vocals. Red Black Gold rocks out, and goes over the top with bells on when we get to the chorus. It then turns into a waltz about Morrissey lyrics and rocks out at the end only to be covered by radio interference. My Boss Was In An Indie Band Once reminds me so much of I, Ludicrous. It tells the perils of someone reliving his past glories through a following in the far east, to a rattling melody. Has the tale of an impossible office romance every sounded as sad and sweet as It Only Works Because You're Here? Probably not, its maudlin country in its heart, but indie pop in its clothes. And it has a cool wonky chorus too. We’re Old And We’re Tired (And We Want To Go Home) is my favourite on the album, a roustabout tune that would make a great pub singalong for those sensitive and long in the tooth. And it’s all about having an early night. Leicester’s Trying To Tell Me Something has that slow early Mary Chain drumbeat, the sad lyrics of a musical past disappearing to the cost of development, a vented wall of fuzzed guitars now and again and the tear jerking vocal. Regardez, Ecoutez Et Repetez is a very fine album indeed.

Written and played by MJ Hibbett & The Validators, who are:

All songs published by WipeOut Music

An Artists Against Success presentation 2009