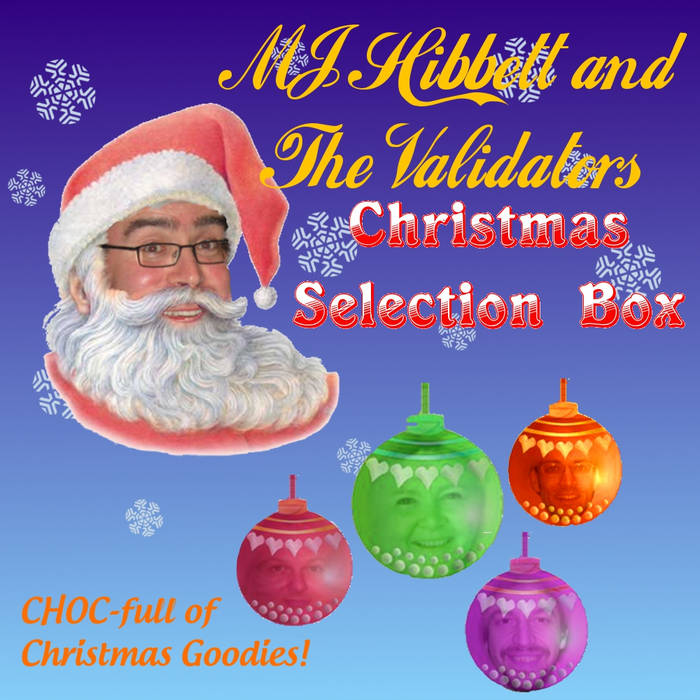 A compilation of ALL our Christmas Songs, available to download exclusively from bandcamp.

Visit our webpage at www.mjhibbett.com/christmas for lyrics, notes and ESPECIALLY for videos!

Track Name: The Advent Calendar Of FACT
Door One A Robin in a woodland scene
Door Two A parcel with a bow
Door Three A traditional Christmas Tree
Door Four A pointless pile of snow
Door Five It's a drunken mob of Carol Singers
Door Six Appears to be a Christmas Sock
It's the madness advent calenders bring us
But here's one thing that it is not

Door seven It's raining all day long
Door eight Westlife at number one
Door nine A child falls off a brand new bike
Door ten A cat entangled in the Christmas Lights
Door Eleven Someone saying "Let's play Triv!"
Door Twelve Me not escaping to the pub
It may not sound like it
But this is something that I love

Thirteen Y-Fronts
Fourteen Jumpers
Fifteen Receipts kept just in case
Sixteen Rude pants
Seventeen "Massage" tools
Eighteen The look on your Nan's face
Being drunk at 9 am
Seems like a Good Idea
When combining your family
With free wine, whisky, rum and beer


Published by Wipe Out Music Publishing
Track Name: Have A Drink With Us (Drink Doch Eine Met)
There's an old boy hanging round outside the door
Who wishes he could come inside the pub
But the change he keeps counting in his hand
Will never be enough

Well if Santa tied you in a bow and left you neath the mistletoe
Would I love you more in the snow? I don't know, so


Published by Wipe Out Music Publishing
Track Name: Last Christmas (in the EU)
The Christmas Market's German
And the Swedish grew the tree
The beer is Belgian and so are the sprouts
The Reindeer are from Finland and
The Port is Portugese
We've got Cava when the French Champagne runs out

And the crackers are all empty though it said upon the box
There'd be massive prizes, there is just a joke

All right, we will have some bread sauce
And put a wreath on the front door
Two types of spuds, and then of course
We'll listen
To Bob Dylan
It must be Santa!

But then a Christmas orphan
Who has somehow survived
Uses a Christmas disco deck
And says, all amplified
"You have obliterated
Everyone I ever knew
But as it is Christmas
I forgive both of you"

Oh thank goodness for Christmas
Without it we'd all get S.A.D.
It's so dark, dank and wet
From November to Feb
Fairy lights give off Vitamin D

Oh thank goodness for Christmas
A showcase for the BBC
We'll get new Doctor Who
Strictly Come Dancing too,
Morecambe And Wise from the seventies

Crackers and Christmas trees
Would go to waste
If Christmas disappeared
What would we do on Boxing day?

Twelve months later he was back and this time he seemed to say
"Hey buddy! Chris Christingle here - happy holidays!"
"And look I've bought some buddies" and sure enough he had
Waving from a Christmas Steam engine, on the next door flat
There was Rudolph, snowmen, and the baby Jesus being adored by a donkey
And Santa even seemed to wink at me when a bulb in one eye went wonky
I said look, you're not part of my culture, and you're not part of my Christmas
You're my nemesis - the Flashing Santa

By the second week the entire street had gone illumination mad
Like a flashing flourescent contagion, spread from a single flat
People came from miles around, and outside our's they'd ask
I wonder why this is the only house that's decided to stay dark?
So I grappled with my conscience and by the start of advent next
I'd been down to Argos for a sign saying "Happy Xmas" with a pulsing X
He may not be part of my culture, but he's now part of my Christmas
He's our old chum - the Flashing Santa

But this year something isn't right - Santa has gone missing
The old guy in the flat has left and he's taken Santa with him
I've scoured the shops for a replacement, but he must have come from Woolworths
There's nothing like him anywhere, I thought until I looked
On ebay, where I paid above the odds for one that's broken -
It said a bulb had gone long long ago, and one of his eyes won't open
And now he's back. On my front door, and he's making Christmas happen
Our cultured friend - the Flashing Santa
Track Name: Roy Wood In The Blue Note
Oh look - Roy Wood
Is standing at the Bar
Of The Blue Note club in Derby
In the 1990s
When we rolled up to dance
All he want's a pint
And a few words with his mates
But he knows as sure as Santa's sleigh is coming round
That someone's bound to say

But Roy, he's aloof
He's heard all this before
Every time he wants a drink after the pubs have shut
Since 1974
It's a Midlands Rite
Of passage into adulthood
Going down the Blue Note on a weekday night
So that you you can shout at Roy Wood.

Logistically it's problematic -
When you gonna find the time to do your wrapping?
The only place that's open is the corner shop
The constant flow of stuffing means the the toilet's blocked
The economy's shrinking as our jumpers get tighter
The only people working are the Queen's speech writers
Everybody's sleeping in their Mum's spare room
I really don't think you can have thought this through
Have you Roy?

But there's one day
When the drunken comments cease
All the idiots are bothering their families
And Roy Wood is at peace
Oh glorious day!
December 25th
As Roy raises a silent pint up to his lips
You'll hear him whisper this: