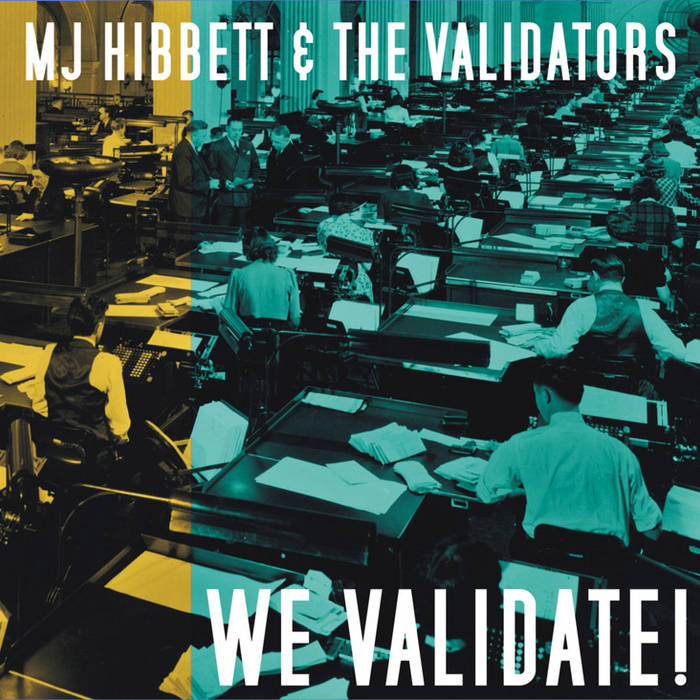 "when it comes to observational pop music few do it better than MJ Hibbett & The Validators".


MJ Hibbett should be a British institution. He's the kind of singer you assume went out with Red Wedge and the Redskins, shuffling somewhere in-between Half Man Half Biscuit, John Cooper Clarke, Carter USM and Billy Bragg, singing songs called "Mental Judo" and "Quality Of Life Enhancement Device" in a broad Peterborough burr. Hibbett's songs are about meagre success ("I went to a gig/And the venue was slightly too big/For the six people who were there/Including the other band"), funny observations ("Flemish is a language I can't chat in/I'll learn it if I'm ever off to Bruges") and politician-bashing ("They say Ronald Reagan was the master of diplomacy... I dunno about you but that's not how I remember it"). Any nonsense is give short shrift, as opening track "Tell Me Something You Do Like" puts it neatly: "A pessimist is never disappointed/But they are disappointing".

The best track here, "The Lesson Of The Smiths", is a paen to how "Morrisey, Marr and Barlow changed my life", cocking its snoot at indie snobbery. Wonkily played and wonkily sung, it's unaffected, unpretentious, funny and stupidly entertaining. I Validate!


This is less an album, more a manual for life. For all this super-arch, hyped-up artrock, don't be fooled. MJ Hibbett's seen it all before and lived to tell the tale. If you want the secret of how to do the same, look no further than these finely crafted nuggets of pop wisdom. To put them over, the Validators find a new ferocity, they are fierce on 'Tell Me Something You Do Like' and inventive on 'We Only Ever Meet In Church' and are capable of very other nuance on the tracks in between, not least ripping off that Rourke/Joyce sound on 'The Lesson Of The Smiths'. One song, however, marks this album out above the rest. Anti-Thatcher songs are a great tradition in British pop music, but they died out somewhat after 1990. After all, how relevant can they be any more? Hibbett tells you how on 'The Fight For History': just wait for the tide of bullshit and lies proclaiming her Britain's greatest ever politician when she snuffs it. Those who remember the 1980s will want to take issue with it, and the battle-hardened Hibbett strikes the first blow here: he was there and he will not forget, and sets out litany of the damage she did. That David Cameron seems a nice enough bloke, is at least one subtext, but let's not forget the kind of people we're dealing with. That's just the highlight of one of 2006's most worthwhile albums. It is true. It is just. It is valid.


HIBBETT is a sane, reasonable man in an increasingly complicated world. His album with his cheery band The Validators unfurls a world of small victories, of not taking things too seriously - in short, of not letting the bastards get you down.

The fast-paced, acoustic guitar and violin-led songs are akin to Billy Bragg without the politics or grumpiness or Chris T-T without the rage.

He sings in an affecting, faux-naive lilt, of a happy life, of not quite changing the world, preferring to stay in and watch DVDs with his girlfriend, of achieving transcendence by buying, say, a new sieve - "quality of life enhancement device" - and of the little things that make life worth living, such as the new series of Doctor Who and free tea on trains.

But there is anger behind the make-do attitude - album highlight The Fight For History rails against the post-death beatification of right-wing leaders, "Warmongers take credit for a peace they didn't want."

Moving and sweet throughout, without ever becoming too twee or cloying, MJ Hibbett may be a self-confessed everyman, but his songs are a manifesto for living in this occasionally numbing, post-Thatcher "consensus."


The terms ‘life affirming’ and ‘inspiring’ have always been over-used in album analysis, so why bother bucking the trend? Luckily MJ is happy to buck it too with an record which would make a coma victim spring up before realising they needed to remember how to stand up, then grinning as they lie in a crumpled mess on the floor. Hideous unnecessary visions aside ‘We Validate!’ is a worthy addition to the Hibbert cult which stems from the type of crazy, informed eloquence that features elsewhere in this mag.

But as I said, this is inspiring. Not necessarily inspiring to make music like it but this acts like a syringe to the brain, his infectious humourous positivity seeping through the listener with unnerving speed. To name names the likes of ‘Tell Me Something You Do Like’ (a fantastic attack of lazy moaning songwriting which resonates nicely with me) and ‘Mental Judo’ (nice little tune embracing nights where no-one turns up) showcase his ability to speed out unfathomably good, upbeat lyrics before you can even digest them. What’s more the heartfelt nature and honesty of these songs, the fact that he clearly will stand and fight against the rose-tinted memory of the politically torrid eighties and does like the Smiths and Take That despite the wankers associated is a damn fine thing. And being able to mention BHS on a record without it sounding out of place is, somehow, a good thing.

The Validators do a fine job in backing him up for high-tempo strum alongs like ‘The Gay Train’ which, I attest, is perfect for swinging round those yellow poles on the tubes to without caring. Life-affirming? This simply inspires life to get better and better.