from Hibbett's Superstore by MJ Hibbett 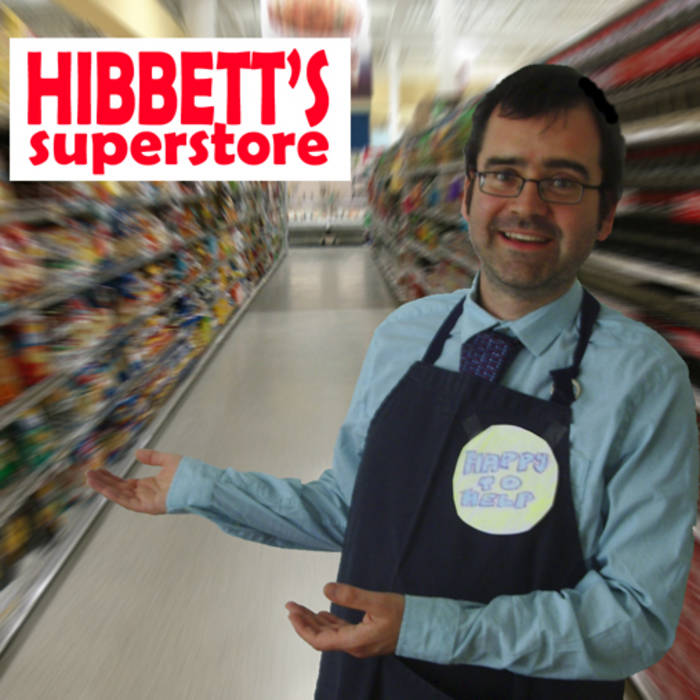 This song was written very quickly indeed over the course of a day (Sunday January 14th 2007, in fact), but the IDEA behind it's been around for YEARS.

The title itself comes from a book that Dr Neil Brown once read in around 1989, when he and I were sharing a house (with various other people) on Paton Street in Leicester. It became a Household GAG that all he ever read was books called Dinosaur Planet, and he used to use the phrase "FEIGNED PENITENCE" whenever he could, as it was his favourite bit of CHEESEY LANGUAGE from its CHEESEY PAGES.

We tried on a number of occasions to squeeze that phrase into songs when we did VOON (also "Meat Curry" for reasons FAR too complex/not actually interesting to anybody else to go into here) but never did, but the idea of Dinosaur Planet stuck with me and over a DECADE later, after I'd moved to London, i got an idea for a FILM! Here is the PITCH:

The dinosaurs weren't wiped out by a comet, they escaped. Now they're back - and they're not happy!

Cool huh? The TRAILER would have been even better - shots of DINOSAURS in SPACESHIPS leaving the earth, then the TAGLINE: "Now. THEY'RE BACK!" THUNK! The fall of a MIGHTY CLAW!

As you can probably tell, i am STILL extremely excited about this idea - what's not to love about it? Dinosaurs AND spaceships? It'd be GRATE! As years passed and I talked of it in PUBS other ideas attached themselves, like having NINJA DINOSAURS doing KNIFE FIGHTS during CAR CHASES, although that may possibly be a Bit Much. When I was talking to that chap from a Publishing Company about writing a book I thought up a few more Proper Book Ideas: the heroine was an ASTRONOMER whose father had been a noted ARCHEOLOGIST. He'd ruined his career and ended up killing himself (or something) in DISGRACE after proposing the ludicrous theory that some of the proposed crash sites for prehistoric killer comets were ACTUALLY craters caused by ROCKETS taking off. She THUS became an astronomer to get as far away as POSSIBLE from The Career That Destroyed Her Father, but - OH THE IRONY! - it's HER research that first spots the returning DINOSAUR SPACE FLEET.

NOBODY NICK THESE GRATE IDEAS! Also the HERO was going to be a very very very junior MP who became Prime Minister because everyone else gets killed when one of the returning ships lands on the MP Bunker which, as he was brand new and thus hadn't gone to the induction meeting yet, he hadn't heard about. There was a "Yes Minister" joke, but that was about all I had for that bit.

ANYWAY, i still think it is a GRATE IDEA but hadn't really got anywhere with it. CUT to January 2007 when I am preparing to go into Studio Sonic (later this afternoon, as i TYPE) to record a few demoes. I would have LIKED to have an extra song to record, to fill up the hour, so returned to some TUNES that Mr Francis Albert Machine had sent me, one of which I'd worked out the chords for and had already had a go at writing words for. These words, they were NOT SO GOOD, so I decided to have a go at some others. LO! Suddenly an extra bit of TUNE for a CHORUS appeared unto me, along with WORDS about a Dinosaur Planet, obviously re-emerging from the depths of my BRANE. I RESISTED briefly, then thought "Well, why not?" and thence a VERSE manifested itself. I went to TESCO and did the next verse upon my return, had the idea for the REST of the song, knocked out the middle bit after lunch and then did the ending before tea time. I was MOST pleased with it - it STRUCK me halfway through that I didn't HAVE to do what I always do in these situations (NB make it a METAPHOR), at least not directly, and so instead finished with a GAG but ALSO - hey! - a Vague Environmental MESSAGE! But mostly a GAG.

It was, in fact, very smooth and easy, and also annoyingly CATCHY as I have been singing it all morning. I only hope Mr Machine likes what I did with his tune...

Who are we to say
That the Dinosaurs didn't conquer space?
They were around on the planet a thousand times
As long as the human race
Maybe the meteorite destroyed
All the evidence that existed
Of the civilisation that fled the earth
In dinosaur spaceships

What if dinosaur explorers
Made another voyage back
In another giant spaceship
To check up on their old gaff
What would happen if their scans revealed
The damaging facts
About the mess we'd made of their old place
They might be moved to ask
How'd you destroy so much of it
In such a little time?
We'd say it was easy, guv
We didn't even have to try

Because their dinosaur planet's not some distant shining star
The dinosaurs' planet's where we are
This is the Dinosaur planet, la de da