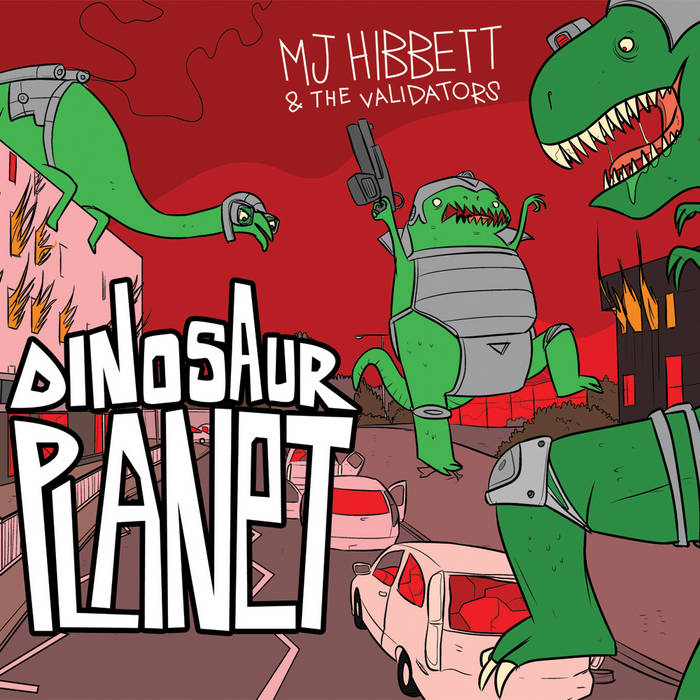 The name 'Dinosaur Planet' comes from many MANY years ago when I was a student, and Doctor Neil Brown was seen to be reading a book CALLED 'Dinosaur Planet'. This became a standing JOKE, as those sort of things DID back then, and every time one of us was about to talk about a BOOK or quote LITERATURE it would be mentioned. Also the phrase "feigned penitence", which was somewhere in it, got used a lot. We were students, it was 1990 and we were POOR, so we made our OWN entertainment.

Anyway, a few years later I gradually got an idea for a FILM called 'Dinosaur Planet' which got thrashed out in various PUBS until I started to think I had a pretty good idea of how the whole thing might WoRK. During this time I wrote a song CALLED Dinosaur Planet which wasn't really MUCH to do with it. It DID feature Dinosaurs returning to the Earth and taking it over, but the FILM has MUCH more to it than that. Honest.

The idea then lay FALLOW until I was In Talks about a BOOK DEAL. The first thing I suggested was a NOVELISATION of 'Dinosaur Planet' - for some reason people seem to think i am JOKING about this, but at the time I thought it would be a good idea - which was politely turned down.

That all went wrong,but the STORY of how it happened formed the JUMPING OFF POINT of My Exciting Life In ROCK, my Edinburgh SHOW in this year of 2008. We had SO much fun that I almost IMMEDIATELY began thinking about what we could do NEXT year. I'd been to see a one man version of Jeff Wayne's War Of The Worlds, and had been a bit disappointed. I'd expected something JOVIAL and FUN with one guy trying to recreate the whole thing whilst singing acoustical versions of the songs, but what I got was all a bit ACTORLY and SERIOUS with BACKING TAPES. THUS, I thought, why didn't I do it the way i WANTED it to be, but do a musical version of 'Dinosaur Planet' INSTEAD?

I soon realised that this might be a bit MUCH - it's an idea i REALLY like though, and would hope to actually DO some time, and to that end I set to writing a THEME SONG. The CHORUS came very very easily, including the "Ah-ooo, ah-oooo" bit (which isn't in the lyrics, but IS in the song) in the chorus. I let the verses come slowly, as my BRANE tried to make it tell a BIT of the story, but not too much, and SOUND like a film theme tune. I didn't want it to be like those crap "Theme From An Imaginary Film" songs that bands used to do in the 1980s when they couldn't think of any words, I wanted it to be PROPER.

It didn't feel finished though, until I realised that what it needed was either a SOPPY or a VAGUELY REGGAE middle bit. I had a go at writing something a bit "Forever Autumn", but it didn't really make any sense. Then I remembered: "LIVE AND LET DIE." THE template, surely, for film theme tunes, and the possessor of a MIGHTY, also DERANGED, middle bit.

With THAT inspiration the rest was easy, and after some lyrical tinkering it was DONE. Now all I need to do is hire me an ORCHESTRA! Also: FIREWORKS!

They do not come in peace, they come in hate
Let non-saurons beware
But is there something that they're running from?
What could make a Tyrannosaur scared?

But could a crazy kind of love exist
Between a human and velociraptor?
Or might it only take one small kiss
To turn that cold cold blood to warm?
All it needs is someone brave enough
To go where only love can go
To hold out the hand of peace and say...
"No! No! No! Mercy!"