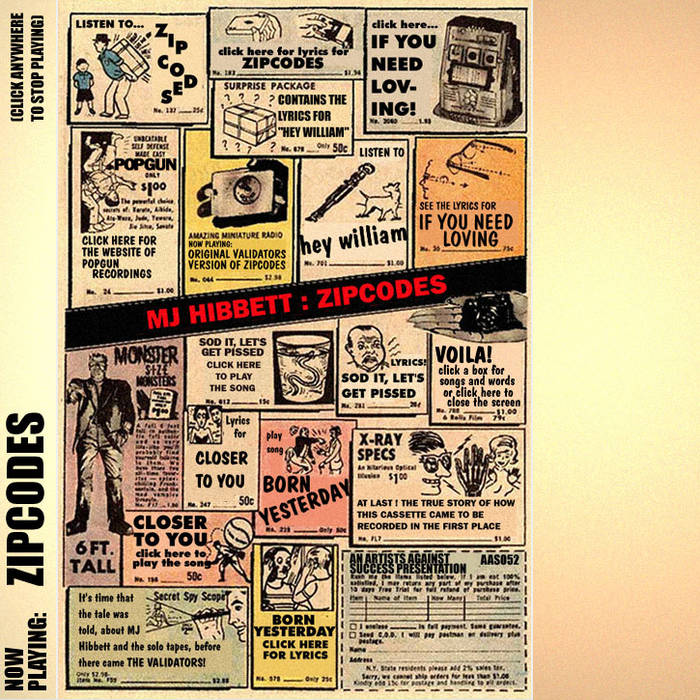 Back in 2005 I was told about a tape being put together called "How To Bling On A Shoestring", which would be a compilation of hip hop tunes done by indie types. It was being put together by the American cassette label Popgun Recordings so I got in touch to see if they'd be interested in using my version of "Boom Shake The Room" or "Stan". I got a very enthusiastic email back from Raoul who runs the label, saying he'd bought my very first single, and he asked if maybe I'd like to re-release one of my old cassettes on his label some time?

I got quite excited about this, especially when I realised I could go one step further and record a whole new tape full of songs. There were several that had never quite worked properly when we'd tried them with The Validators but which I still liked, and this could be a nice way of getting them out into the open air. Raoul was keen on the idea so I chose the batch of songs I wanted to do and headed home to record them.

This coincided nicely with The Tape On My Spool and The Landlady (i.e. the people I share a house with) going off on holiday together, leaving me alone in the house. Well, I say "alone" but actually I was there with three cats who needed feeding and as I was thus honour bound to be home at a reasonable hour every evening I decided to use the time well by getting a home studio set up on my computer.

I'd never used music software before, preferring to stick to an old four track cassette machine, but I decided that the time was now ripe to make the move to digital, especially as my old four track had recently gone senile and decided to play everything back at random speeds. It took me quite a while to get used to this new way of working but when I did get it going on - oh baby! You'll probably notice that there's really rather a lot of loops and backwards things and samples, as I gleefully discovered that - hey! - you only needed to play each thing correctly once or twice and it'd work for the whole song! I was also extremely happy to discover that this also meant I could chop up and rearrange songs at any time I liked, so did that quite a lot too.

The two songs this crops up on most are "Sod It, Let's Get Pissed" and "Zipcodes". At the end of "Sod It, Let's Get Pissed" you can hear a "choir" fading away at high speed. Originally this was meant to go right in the middle of the song and I spent a whole afternoon recording all the different voices and harmonies for it. Unfortunately it came out sounding utterly crap, so I was able to shift it from it's central position to the end. Mind you, since then I've been singing the song live and have done that whole bit back in the middle again, so you never know, it might return one day as a full band recording. At the time though it was a mighty relief to realise I could just move it around, rather than have to re-do the whole song.

"Zipcodes" was built up in a much more technical way. As you can hear from the Validators' version on this CD, we'd originally intended the song to sound very different indeed, in a sort of Jazz Style. However this turned out to not just be impossible to play but also a bit boring to have to listen to, which is why that version breaks down after the middle bit, so I thought I'd try and do it a bit differently. It's a very long song and it's pretty much the same all the way through so I had to mix up the sounds all the way through to make it a bit more interesting to listen to... that was the plan anyway. There's about six different types of acoustical guitar rhythm on it, all double-tracked, as well as all sorts of other weird noises and tones. My favourite bit to do was the slight buzzing sound you can hear occasionally throughout. If you concentrate really hard you can just about tell them it changes tone, panning, and volume all the way through - I spent ages doing that!

In fact, the main thing I learnt from the whole process was not to sneer so openly at Dance Artistes. I'd previously been agog at the idea that anyone could spend so long recording something as simple sounding as dance tunes, but after spending the best part of a morning trying out different reverbs for my own finger clicks I learnt to be a bit more sympathetic!

Anyway, I recorded the tape, sent it off to Raoul, and then heard nothing back. I see from his webpage that he's busy, so didn't want to disturb him, but was still a bit sad about my songs not coming out. Tim suggested using a couple of the songs on the new single, but when I tried it out they didn't really fit in, so instead we decided to put them on all together in the multimedia section. I'm extremely glad to have done it, I must say, as I rather like these songs. Hey kids, I hope you do too!